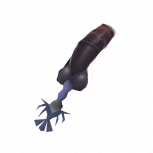 By ϟTxuj, November 18 in Aftermath